Inside #URBANHEROES – Core Rulebook you will find

Rules: Original incremental dice system rules. No modifiers, thus no hard calculation skills needed. You will not be required to roll too many dice at once. Full rule coverage for every single natural phenomenon. Easy rules for beginners and rich experience for experts.

Powers: Five classic superhero-related Origins of Power (Magical, Psionic, Divine, Genetic and Objects) revisited in a contemporary setting. A hundred Powers that can be mixed and matched to create a unique character. All of the Powers work in conformity to actual physical laws.

Abilities: Innovative Abilities that rely on the player’s problem solving and decision making skills. More than 20 Specializations let you customize your character as a real person.

Extras: #UrbanHeroes is a world that grows day after day, visiting our social account you can find free stuff that will help you play.

On our Issuu profile you’ll find some preview and free content for example a selection of 40 pages from the rulebook and the first 20 pages.

Wear a cape has never been so dangerous…

The world as we know it is no more

In a ghastly pyrotechnic moment, the world as we knew it was no more.

In 2008, an explosion of the Large Hadron Collider at CERN left a huge hole on the European landscape and spread radiations through a world already burdened under a global financial crisis and numerous armed conflicts. This hitherto unknown Z-radiation catalyzed the arrival of H.E.R.O.es (Humans Exposed to Radioactive Outbreaks).

These “human singularities”, also mockingly termed GeneZeta by some media, possessed a wide variety of strange and potent superhuman Powers.

Shortly after their appearance, attracted to these powers, the US government drafted some of these H.E.R.O.es to form a special team to protect its homeland from threats and dangers during this period of global uncertainty.

The creation of the team of Amazing Men of America generated a global media firestorm: Its members became regulars at press appearances and TV shows; thousands of sites and social networks dedicated to them sprung up on the web; entrepreneurs and businesses all over the world started commercializing and profiting from this newest branding sensation. Overnight, H.E.R.O.es became a subject familiar to every household in every corner of this hyperconnected world.

As the H.E.R.O.es interacted and integrated with the rest of the human world, they also began to be corrupted by the vices of the world: sex scandals, mysterious deaths, radioactive drugs, mass disinformation and deranged behaviors, amplified by the scope and potency of their Powers, sullied their reputations and standings among the rest of the population, igniting worldwide debates and conflicts regarding to the rights and social statuses of these H.E.R.O.es.

Now, the H.E.R.O.es community is at a crossroad. Some of them exploit their gifts for commercial gains; some choose to hide their gifts to be able to lead a normal life; a few maintain a purpose of serving for the better of the world, convinced that they are fighting against a secret conspiracy encompassing the world’s superpowers and their retained superhero teams; while there are still others obstinately struggle to live openly and proudly with their bodies and abilities, striving for acceptance from a fearful and distrustful general populace.

#URBANHEROES includes all the backstory and rules needed to start acting and playing as a superhero in our original game universe. We focus on giving you a straightforward but tactically sophisticated rule set that will allow you to develop a realistic and unique H.E.R.O. while digging deep into their psychological traits and social behaviors.

There are no reviews yet.

Only logged in customers who have purchased this product may leave a review. 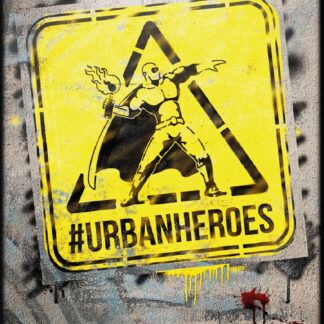