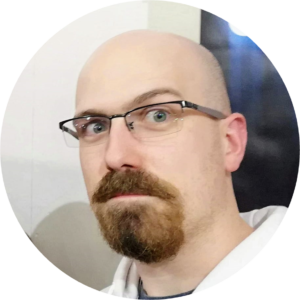 Born in the ’90, he fell in love with gaming convention since when he had way fewer years and way more hairs. He started working during CON with Games Workshop at the age of sixteen, moving then to promotion of RPGs and shared campaign organized by himself.

He is now working in a gaming store (boardgames and RPGs) near Genova, and there (since 2017) he has started his local activities as a promoter for different games and shared campaign, usually played with 3+ tables of players with D&D, Cypher System, World of Darkness and other Rpg.

He cooperates with Italian webzine like Nerdando and Tom’s Hardware Italia writing reviews about RPGs.

Arturo is the good guy behind the stand, ready to discuss with you about gaming systems, science, lore, fantasy worlds and of course dice!

He’s a dice & handbook maniac. Actually he has more than 3000 dice and has broken a bookcase with his handbooks… Twice.

That’s what we call “the weight of culture”.

Send him an e-mail